You can hardly turn on the news without hearing about a new discovery about the "human microbiome", that collection of bacteria living in an on our bodies. Study findings tell us that a more diverse collection of 'gut bacteria' will help with everything from a weak immune system, irritable bowel syndrome and even obesity! So why isn't everyone loading up on fermented food? Asking this question to anyone who would listen in the past year has led me to believe that these are the issues that seem to turn people away. No one seems to question the idea that eating more probiotic, live-cultured food is probably a good idea. However, convincing the larger part of the population that it's perfectly safe and normal to eat something that's been resting under a slimy layer of mold is another battle altogether. The set will allow you to: Plus, it's not single purpose! When you're not fermenting, use the ReCAP lid without the airlock to tote around smoothies or coffee! We're promoting the FARMcurious Fermenting Set through Kickstarter and we've already reached our tier 1 goal, guaranteeing its success. We still need your help sharing the project though. We created this page to help make that easier. Still not sure? Check out our video. [caption id="" align="alignnone" width="384"] 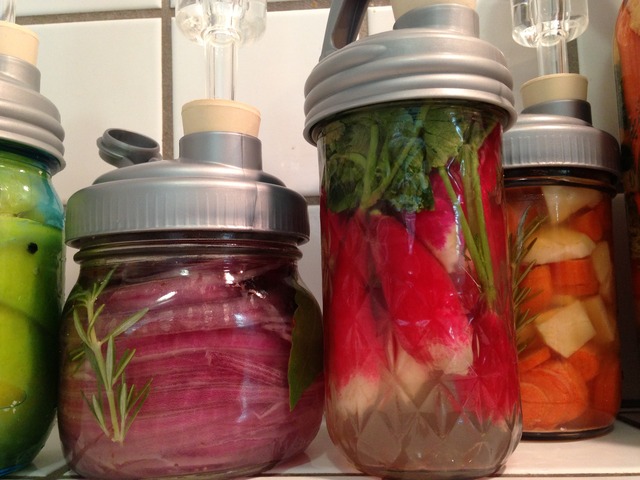 FARMcurious Kickstarter Video[/caption] We'd obviously love if you'd back our Kickstarter campaign or pre-order a set. But do sweeten the deal, we're hosting a giveaway along with five other bloggers to promote the campaign. Use the widget below to enter our giveaway or visit one of these other amazing site by food writers who have all contributed recipes for the bonus electronic recipe collection available through our Kickstarter. Other Giveaways live from May 13-May 20, 2014: Use the widget below to enter our contest. You can enter by liking us on Facebook, Following us on Twitter or by Tweeting the following message (all must use the widget below to be entered). Twitter message should read: "Say no to mold and back the @farmcurious #Kickstarter project for a home Fermenting Set. http://kck.st/1eeGNzm" a Rafflecopter giveaway